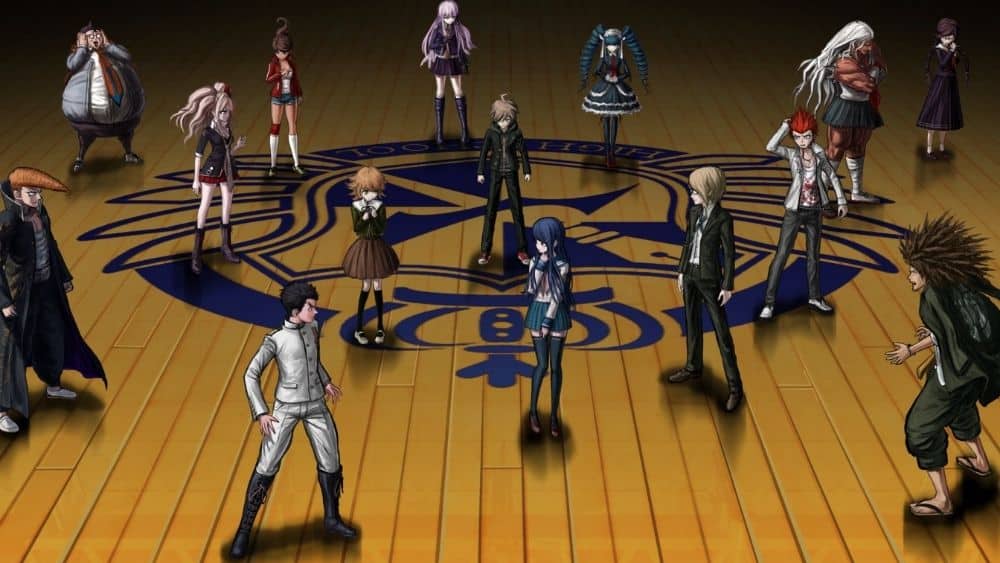 Danganronpa was initially conceived as a dark fantasy game with adventure and detective elements mixed in. The first game is still the best-selling one to this date, establishing the basic plot and gameplay loop for all subsequent games. Which is the best Danganronpa game though?

Read This: Who Survived in Danganronpa 2: Goodbye Despair?

Related Read: 15 Games Like Danganronpa That Are Worth Playing

The 4th one is a spinoff titled “Danganronpa Another Episode: Ultra Despair Girls”. Danganronpa is centered around a group of elite high school students who are trapped in a battle-royale killing game by a magical bear called Monokuma. Most of the game plays like a visual novel/ dating sim.

In all four Danganronpa games, you have 6 chapters. Each chapter is split into 3 stages. The first stage is just normal high school student stuff. Mingling with other students, learning about them, and exploring the school itself.

In the second stage, you witness the post-murder phase and go around collecting clues for the 3rd stage. The 3rd stage is called “Class Trial”.

Imagine a school debate team but instead of debating, you are trying to solve a murder. In this final stage, you’ll have the most gameplay as you listen to each student and play different minigames to find out the culprit.

Let’s start the list with number 4, which is the spinoff-

This is the only game on my list that’s a spin-off, and not part of the mainline series (of which there are 3 games). Ultra Despair Girls is also not a visual novel/ adventure, but an action horror game with a third-person camera. You play the character Komaru Naegi who’s been trapped in her apartment for a really long time.

When the other students try to rescue her, they are confronted by a huge swarm of Monokuma bears who seem hungry for blood. Apparently, a faction of children called the Warriors of Hope has taken over an entire city. And their leader, Monaca, plans to get rid of all the adults which will create a paradise for children.

You have 3rd person shooting in which your character is armed with a special hacking gun that disables rogue Monokumas. A lot of time will be spent roaming around in the city talking with people and solving puzzles. You are assisted by a sidekick character from the first Danganronpa- Toko Fukawa.

Toko can stun gun on herself to switch personalities and become Genocide Jill who’s a crazy maniac armed with sharp scissors. Genocide Jill’s special attacks are useful for clearing out large numbers of enemies at the same time. You’ll earn coins by killing foes which can be used to purchase upgrades for your weapons and character attributes.

The newest Danganronpa game, and the 3rd entry in the main series. Just like the previous games, you have 6 chapters and 3 stages per chapter. The three stages are- School Life, Deadly Life, and Class Trials.

For the 3rd game, you’ve got an all-new cast of 16 characters with the plot centered around Kaede Akamatsu. Once again, a psychotic robot bear with magical powers traps all of you inside a school where you’re forced to kill each other in order to survive. Apart from the new cast of characters you also have redesigned artwork and new minigames.

Each one of the 16 characters has a unique strength, and they are all quirky in their own ways. Some are upbeat and easy to like while others are shut-in and secretive.

There are crazy inventors, calculated assassins, and boneheaded brutes. No matter what kind of person you are, you’ll find someone in the cast you really like.

Don’t get too attached though because they might get killed off at any point. Of course, you can try to solve the mystery and find out their killer.

During class trials, you’ll learn to lie and twist words as you come up with clues to find the killer. You’ll also have to pay close attention to what each student is saying and find flaws in their alibi.

It’s wacky, extremely anime-like in all the good ways, and totally insane in its concept. No, not the concept of battle royale itself because that has been done a million times by now. Rather, it’s the setting and presentation that sell this game.

Trigger Happy Havoc is set in a high school for the elite called Hope’s Peak Academy. Here, 15 exceptional students who each specialize in a unique field are selected for the ultimate trial. A mechanical bear called Monokuma will trap them in a game where they must kill each other to make it back into the real world. They are still at school, but it’s more of a prison and the goal is to not get caught.

You have 6 chapters and 3 stages per chapter like every other Danganronpa game. In the first stage, you move around the school in first-person view and explore areas while talking to students. You can also examine objects in the environment to get coins that will give you rewards at the school shop.

The second stage requires you to collect clues after you see that someone has been murdered. You also have dating sim sections in which you can use your free time to hang out with someone, offer them presents, and learn more about them.

Finally, there’s Class Trial which is the 3rd stage, and sort of a court hearing/ school debate section in which you interview students and offer counter-arguments. You want to find the murderer while also keeping yourself out of the spotlight and not drawing too much suspicion.

Arguably the best game in the entire series, and it’s all thanks to the incredibly well-developed cast of characters. Everything from their appearances to personalities is done extremely well and in a believable manner. Well, about as believable as a game about a creepy bear forcing high schoolers to kill each other can get.

Since the characters are written in a manner that encourages you to explore their story and past, you’ll spend a lot of time chatting with each one. Maxing out your bond through chatting and gifts will unlock various unique skills that you can use during Class Trials.

Just like before, finishing a chapter will unlock an entirely new part of the school that you can explore. The best thing about Goodbye Despair is that you no longer have obvious giveaways for the killers like in the first game. The students do a better job of covering up their trail and diverting any suspicion.

Q: Does the Danganronpa series have any additional content apart from games?

A: It has a couple of spinoff games on iOS and Android, plus there was an anime based on these video games. Danganronpa visual novels and manga also exist.

Q: If I am new to Danganronpa, do I have to start with the first game?

A: Not really because each game’s story is fairly independent and can be enjoyed on its own. You can even check out the manga and visual novels.

Q: I don’t own a console or gaming PC; can I still play the Danganronpa games?

A: You absolutely can, because the games are available for iOS and Android devices alongside console and PC. Besides, you can run these games on old laptops from 7 years ago.

Q: How long is a Danganronpa game?

A: Depends on which one we’re talking about, but all of them take around 40 to 60 hours to fully complete. If you only do the main storyline, you can finish Danganronpa in around 20 to 25 hours.

Q: I have never played visual novels or adventure games before, is the gameplay difficult?

A: Quite the opposite, visual novels are considered the easiest game genre since they require no hand-eye coordination or quick reflexes. You can take these games at your own pace.

When Kazutaka Kodaka initially came up with the idea for Danganronpa, it was rejected for being just a bit too dark and violent. However, a modified version of the original plot eventually got approved and turned into a game by Spike Chunsoft. The game doesn’t fit into one specific genre, although the majority of its gameplay matches that of visual novels.

It does have some adventure game elements as well, although you won’t find a ton of areas that can be explored. The game is very linear and tightly scripted, and the characters feel like they’ve come straight out of an anime. If you’re not a fan of anime or melodramatic teenagers you’ll probably not like Danganronpa.

But if you are a fan of anime-themed visual novels, these games are definitely worth checking out. You can play them in any order you want because the plot and gameplay don’t vary a ton from one game to another. The 2nd one is the best, but the first one has a charm of its own and still holds up pretty well today.